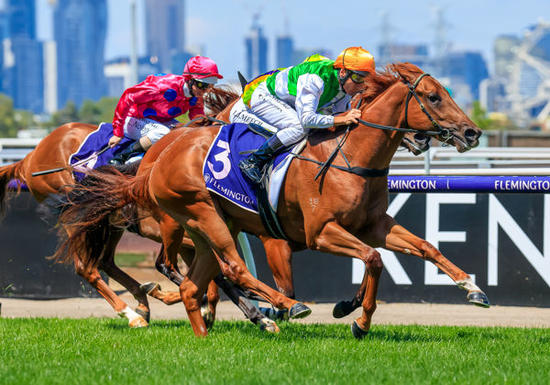 lovemyself is likely to be Sydney bound on the back of an outstanding debut performance at Flemington on Saturday, the exciting colt set to tackle some of the country's best juveniles in the Group III Pago Pago Stakes in two weeks’ time. 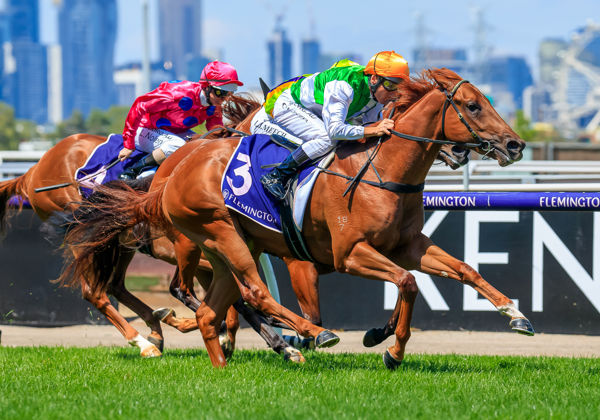 Slowly away, the handsome son of Ilovethiscity settled down midfield and from the 500m it was obvious that he was travelling better than his rivals... but from that stage he was stuck amongst them with nowhere to go.

"I asked him how his heart was at the time and he said the same as your's!" said owner and breeding Neville Murdoch.

But in typical Oliver style there was no panic and when the gap did appear late Ilovemyself charged through it... "he just went bang!" Murdoch said.

Trainer Greg Eurell was feeling the tension as well - "the heartbeat started to get a lot stronger when he couldn't get any room... but he is a very tough horse and it was just a matter of hoping that the line didn't come up too quick."

"He quickened up nicely when the gap came," Oliver reported, adding that in regards to finding trouble in running "it helps to have a horse travelling as well as he was!"

"He is a lovely horse," he continued, "and he has a good future."

"We've always had a pretty big opinion of him," Murdoch - who bred Ilovemyself at his picturesque farm, Larneuk Stud just out of Euroa.

"His trials were good but you do want to see him do it on the track."

As is Eurell who feels that the 1200m of the Pago Pago "will suit even more" than the Flemington 1000m.

Racing is all about dreaming and should Ilovemyself win the Pago Pago... well he is not nominated for the Golden Slipper but there is always the late entry clause!

In the meantime Murdoch is excited about Ilovemyself's siblings, the former New Zealander Starspangled Rodeo (winner of three in a row at the start of his career) now in Sydney whilst Cluster Of Stars is spelling having caught the eye with a fast finishing third at debut.

Ilovemyself's dam Sunstyle also has a "lovely" Cluster yearling filly whilst her 2019 colt by fellow Larneuk Stud stallion Wolf Cry is, according to Murdoch "absolutely outstanding."

"I was on a plane at the time but when I got off I had a message from Lindsay saying I now owned a Xaar mare called Sunstyle."

"She is a lovely mare who puts such a nice foal on the ground," Murdoch said, adding that a return visit to Ilovethiscity is on the cards.

"His stable name has always been Greggy so I joked with Greg that I'd name the horse after him!"

Eurell grimaced at the memory - "I remember Neville telling me that he had a good name for the horse - Ilovemyself - and I thought nothing more of it... "but then the papers came through and I thought 'he got me!'"

Eurell hopes however that it is a name we hear much more off, as does Murdoch who said "I think we are in for a good ride!" - story by Kristen Manning