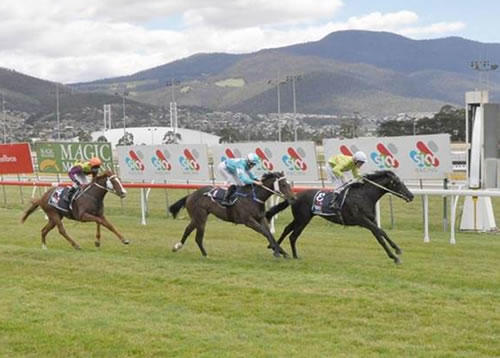 Larneuk Stud's exciting young stallion Cluster is off and rolling with his very first runner - the promising Gee Gees Darl - recording such a gutsy victory at her Hobart debut last weekend.

Taking on five trial winners at her debut run in the state's first two-year-old race of the season, Gee Gees Darl was a little green but did settle nicely for Craig Newitt midfield, taking a gap through in the run home - hitting the lead a little early but showing plenty of heart and fight when challenged over the final stages.

"We thought she'd be hard to beat," Leon Wells said, noting that he had been very pleased not only with Gee Gees Darl's Hobart trial second in late October but also with the way she had progressed since.

"She came ahead in leaps and bounds," he enthused he said of the filly who he describes as "a lovely filly, a beautiful ride who does everything perfectly."

"She has really muscled up well as she has matured and she pulled up very well from the run from which she is only going to improve."

The Alexandra Plate at Hobart in late December is next up for Gee Gee's Darl who, Wells says, has a bright future.

"I think she is pretty exciting to be honest."

Cluster has 50 two-year-olds ready to hit the tracks and Larneuk Stud's Neville Murdoch is looking forward to their emergence.

"We have always had a lot of confidence in Cluster and we are delighted with his winning start. He has been well supported by the owner/breeder market and it will be exciting to see our clients do well with him."

"Gee Gee's Darl was a real stand-out as a yearling and it is great to see her go on with it knowing that she is only going to get better as she gets older as is typical of the Fastnet Rock line."