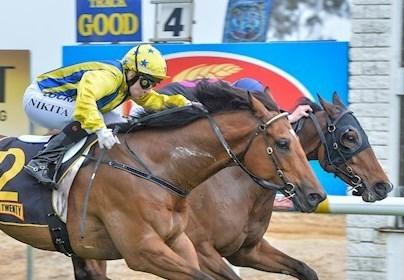 Promising Greg Eurell trained four-year-old Seven Year Reward keep his unbeaten record intact at Bairnsdale yesterday, combining with Nikita Beriman (one of three winners for the day) to take out the Bairnsdale Horse Centre BM64 Handicap (1000 metres).
Starting at “Winx Odds ($1.20)”, supporters of the shortest priced favourite on the Bairnsdale Racing Club’s Cup Day program did have some anxious moments. Seven Year Reward certainly didn’t have things his own way, parked three wide outside the speed and showing the signs of inexperience on the home turn and in the straight. Beriman didn’t panic, the gelding holding on to beat fellow Cranbourne trained gallopers Ansinna (Shea Eden) and The Centaurian (Barry Fox).
Rangal Park Stud bred the bay by Reward For Effort from the Keltrice mare Seven Year Itch. Seven Year Reward looked to be a smart galloper when seen at the trials in September and November 2016, living right up to his early promise on debut at Geelong (September 22). Rangal Park Stud and Eurell Racing have enjoyed a very successful partnership for many years, and are certainly looking like being rewarded for their patience with their latest project.
Beriman, who rides plenty of work for the stable at the Cranbourne Training Centre, was also delighted with the win, “Seven Year Reward is a better horse than what was saw yesterday. Going from the synthetic (Geelong) to a deteriorating track was a test. Didn’t have the best of luck in running, but still held on. Nice horse for the future.”
Eurell and the Butlers (Rangal Park Stud) have enjoyed plenty of success together over the years. Horses the calibre of Sister Norma (six wins, four in city), Nassi (four wins), Braided General (four wins, two in city) and French Tang (three wins).
Hong Kong galloper Romantic Cash (Danerich x Homeland Sheila), a winner of four of his ten starts, an example a horse educated by the Eurell for Rangal Park Stud, prior to be sold after trialling impressively.
Rangal Park Stud (http://www.rangalparkstud.com.au) consists of 530 acres of highly fertile sandy loam soil situated in the heart of the North-East region of Victoria, five minutes out of Euroa. Rangal Park Stud has been the home of stallions Ne Coupez Pas, Keltrice and Palace Music. Underated sire Danerich, a son of the all-conquering Danehill, is the Stud’s current resident sire.