CANFORD CLIFFS IS GONE BUT NOT FORGOTTEN 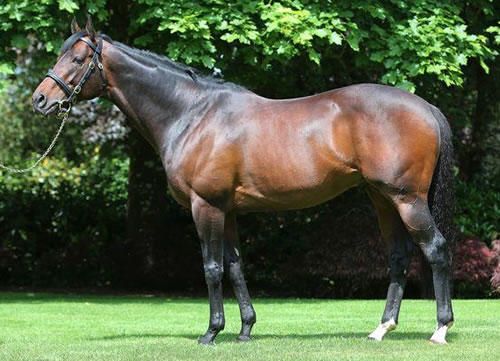 The stallion, which had an impeccable racing record that netted five Group 1 victories over 1600m in Ireland and England, stood five seasons at Blue Gum Farm at Euroa.

Canford Cliffs was exported home to Ireland in December of 2016 with his papers stamped and never to return.

Cranbourne trainer Greg Eurell bred Great Duchess, which has now won four races and $324,595 in prize money, from Great Dame (Danerich) which he also trained for a group of owners, headed by his wife, Danielle. And most of those owners also race Duchess.

Eurell said Duchess was consistent and honest and would ideally go through the Leilani series for mares, culminating in the final over 1400m at Flemington on July 4

“I think 1400m is her ideal distance and it could work out a good series,” Eurell said.

“It’s very rewarding to have bred her because as we know it’s a long hard battle from the start and no matter what you do, to actually get up and win a race is great,” he said.

“You have got to be ever hopeful that everything comes out in the right spots on these horses and they’ve got the ability to run. “When it’s a long term project like that, it is rewarding and you do get a little bit of an extra kick out of it for sure.”

Eurell said he was a bit of a wrap for Canford Cliffs and believed at the time that the match would work with Great Dame (Danerich/Star Opera) which he trained to two wins, including a victory at Sandown, from her four starts.

“I liked the Canford Cliffs breed and we’d been doing a little bit of work through Blue Gum. The stars aligned to head in that direction,” Eurell said.

“And as it always with these stallions, here today and gone tomorrow and then their progeny start to fire and you don’t get the opportunity to go back to them.”

Eurell described the Canford Cliffs’ progeny as “time packages” and if breeders were looking for the early runner, it just wasn’t there.

“Like all of them you will get the odd one, but this breed you would say about 90 per cent would take a bit of time,” he said.

“They are good honest horses once they get there.’’

Blue Gum Farm’s Phil Campbell said Canford Cliffs, a Coolmore stallion, he understood was sold to South Africa after he had had his final shuttle to Australia.

Campbell said the stallion did not produce the results when he was standing at Blue Gum.

“But as is so typically the case, we are very, very quick to judge and it would appear to me that he has compiled a better record since he stopped coming here with his progeny getting a little bit more age and maturity about them,” Campbell said.

“He was a very good two year-old himself but he was a better three and four year-old. He just didn’t get two year-olds here and was slow off the mark. As a result he fell out of favour very quickly with the market and as such the owners made the decision to not continue bringing him out here and ultimately to sell him.”

Campbell said Canford Cliff started off with a real bang with his two year-olds in the UK and Europe but never had the same momentum with his Australian two year-olds.

He said there were obviously different conditions and training methods in Australia and it was a classic example of starting off very well in one hemisphere and being unable to get the momentum going in another hemisphere.

“As good as he is with his two year-olds in the UK, he covered a big book of mares here but he wasn’t able to maintain that because he just didn’t get results early enough here,” Campbell said.

“He had a ridiculous amount of individual two year-old winners from his first crop in Europe and however many stakes winners as a result that news and he was very, very popular that year.”

Campbell said Canford Cliffs was a magnificent horse to work with and was extremely fertile. He was good looking horse that got “sacked” before he got going in Australia.

He said a drop off of 106 mares from the 2015 season to his last season in 2016 was an example of how quickly the wheel turns in the breeding industry.

But Campbell said that Canford Cliffs also struggled to maintain the momentum in Europe, as well, with his first crop failing to train on.

“And his subsequent crops weren’t anywhere as successful as his first crop which is interesting because out here his progeny has got better as they have got older and matured,” Campbell said.

And he is impressed with Eurell’s mare, Great Duchess, and says there are others around as four-year-olds.

“He is getting a good volume of winners now, but the bird has flown unfortunately,” he said.

Asked whether Canford Cliffs would get support from breeders if he returned to Australia, Campbell said: “The big boys are bringing in new horses with sex appeal and bells and whistles and flashing lights on them every single year.

“And with a big gap when he was last here, he would have runners again, the answer to the question is no.’’

While Canford Cliffs’ service fee in his first season at Blue Gum was $19,250 and then reduced to $13,750, Campbell believes his fee was never in keeping with his race record.

Campbell said the stallion was a bit of a genetic freak.

“He had a pretty off the wall pedigree but he had the race record of a very, very serious racehorse,” he said.

“He was a cracker. As a matter of fact, he finished second to Frankel in the Sussex Stakes at Goodwood when he was lame and I honestly wish that he had have been fully sound in that race because that’s how good he was. He could compete with a horse like that.

“He was an absolute top drawer racehorse.”

Campbell side Canford Cliff’s name was quite often spotted in the winner’s list.

He said Eurell and his clients were a good supporter of Canford Cliff’s when he stood at Blue Gum Farm.

“I am absolutely rapt that he has been able to breed one with above average ability because she will be a very good mare for him going forward,” Campbell said.