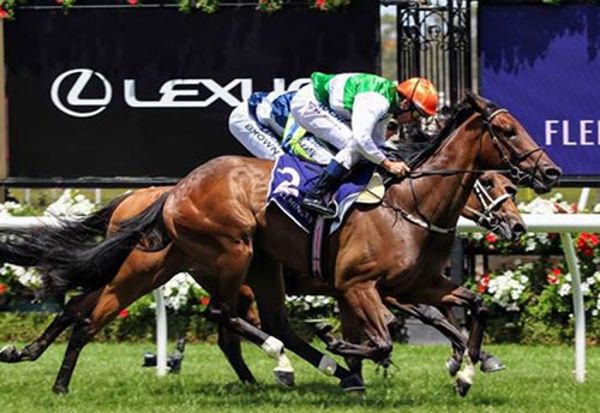 As breeder and owner of promising gallopers O’Tauto and Starspangled Rodeo, Larneuk Stud’s Neville Murdoch is looking forward to the Flemington Carnival with both horses set to target the $500,000 Melbourne Cup Country Final on Oaks Day.

Trained by Greg Eurell, four year-old O’Tauto is by Larneuk’s prolific sire of winners O’Lonhro and was retained to race by Mr Murdoch.

A winner on debut as a late juvenile, O’Tauto has not looked back proving a highly talented performer with two wins and four placings from seven starts including a third to The Inevitable in the Group III VRC C.S Hayes Stakes.

Spelled after an unplaced run in the Group I VRC Australian Guineas, O’Tauto indicated a good run at Flemington is to be expected with a sensational first up second in a $100,000 race at Geelong last Wednesday.

“After that run in the Guineas we discovered he had a couple of bone chips in his fetlocks, so we took those out and gave him a good long spell,” Murdoch revealed.

“His run at Geelong was outstanding being first up over 1500 metres and the horse that beat him, Harbour Views, has won five from five so it was a very strong race.”

With over $200,000 in prizemoney already, O’Tauto is a horse with a very bright future in keeping with his classy Black type pedigree.

O’Tauto is from Taut, a half-sister by Strategic to stakes-winner Trim, the dam of current Group III winner Manicure, while another of Taut’s half-sisters is the dam of Group I VRC Makybe Diva Stakes winner Gatting.

Taut has been a good producer for Larneuk Stud and has a two year-old filly by Ilovethiscity, a yearling filly by Cluster and produced a colt foal by O’Lonhro last week.

Bred by Larneuk Stud and co-owned by Mr Murdoch, Starspangled Rodeo started his racing career in New Zealand and won three of five starts for the Baker and Forsman stable before coming across to Australia earlier in the year.

Second at his first two starts for his new trainer, Starspangled Rodeo was most recently beaten narrowly in a $100,000 lead up race for the Country Final at Seymour last week.

A half-brother to smart winner Suncraze, who has won nearly $600,000 in prizemoney, Starspangled Rodeo is from Sunstyle, who is also doing a great job for Larneuk Stud with a two year-old colt by Ilovethiscity, a yearling filly by Cluster and she was covered last spring by Wolf Cry.

“We bought his mother from the Inglis Broodmare Sale in Sydney for $700 in foal to Teofilo and he was the result,”Murdoch said.

“We always really liked him, so we kept him.”

For the record, O’Tauto’s dam Taut was also bought from an Inglis Sale for just $800 in 2014 and the success of these two broodmares will give hope to all breeders with a limited budget dreaming of producing a runner in Cup Week!