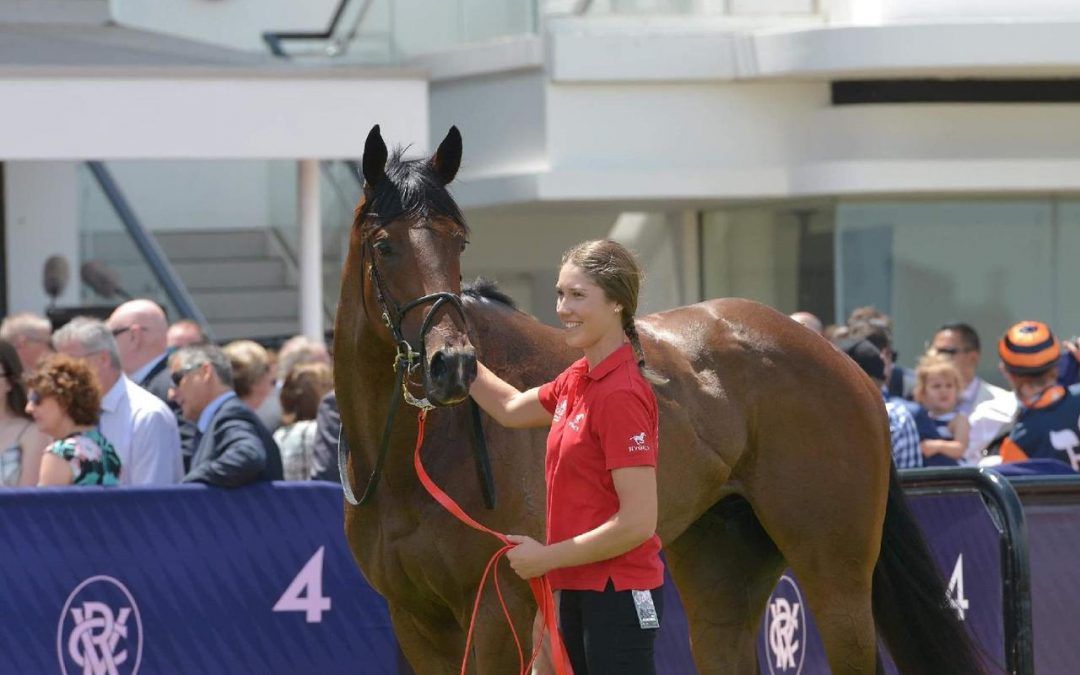 Since O’Tautos nail biting win at Flemington there have been brilliant articles written by some of racings top journalists – John Tapp & Kristen Manning – these articles can be accessed through our media platforms. His form: Four starts Two wins & Two seconds, his pedigree, Greg’s association with O’Tautos breeder & owner Larneuk Stud – Neville Murdoch.. all these things make up the race horse we watched dive at the finish line with bated breath, exhaling a sigh of relief, closely followed by an exhilarating cheer!!

However, there is another side to O’Tautos story, a quiet one that needs to be told.

Someone else was watching O’Tauto that day from the mounting yard – his strapper – Claire Skerman.
Claire was excited & thrilled just like everyone else but her elation was met with tears – the happy kind and an overwhelming sense of achievement. Claire had just strapped a winner at Flemington, the “Holy Grail” for all strappers, but this one’s a little more special.
Claire started out riding as a 6yo in a local pony club with her parents supporting her all the way, an achievement within itself given Claire suffers extreme scoliosis (a severe curvature of the spine). Horses became her way of life, as it does, and working in a stable was the right career for her, which she started after finishing school.

On the 27th August 2017, Claire went out that morning to ride her sisters horse. Riding around the arena, he started to get agitated and proceeded to buck uncontrollably, Claire was out of sync with her mount, him coming up as she was coming down and she was inevitably dislodged. Claires’ Dad was ring side, attending to his daughter knowing she couldn’t get up and the pain in her back growing, he called an ambulance. In hospital, Claire and her family were informed she had an L3 burst fracture and other slight fractures to L2 and L4. Claire had surgery on the 30th August where surgeons removed a rib to use in repairing her spine. Claire’s initial recovery was intense. A year for the bone graft to heal, months in a wheelchair, back brace, rehabilitation to learn the simple things – standing up, walking again.. she still has ongoing rehab & physiotherapy.

Claire began work with us at Cadet Lodge in July 2018, in her second week she was asked if she would like to strap a horse in his first start at Cranbourne – O’Tauto – he won and Claire has been with him ever since.

Flemington was a thrill, strapping O’Tauto at the All Star Mile would be monumental.