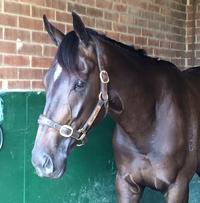 Galaxy Raider was in an awkward position well back on the rail on the home turn of the Cove Hotel Plate (1200m) but jockey Chris Symons was able to plot a course through the field to get the promising galloper home by a length.

Eurell said Galaxy Raider had given him the impression he would be better suited over 1600m but the son of Hard Spun showed his quality with his debut win.

“I thought it was a huge effort to do what he did so it’s very pleasing to start,” Eurell told Racing Victoria.

“He’s given us every indication that there’s a little bit more but through greenness, we haven’t been able find out any more of what his ability is at the moment.

“I honestly believe he’s going to make a lovely miler this horse. He’s got the right temperament and all of the right attributes and he’s heading in the right direction.”

Eurell added Galaxy Raider was in work at the perfect time to test his talent in the coming weeks but he would make the grade in tougher races than Wednesday’s $27,000 maiden contest.

“He is green but he’s a horse that will definitely improve,” Eurell said. “We’ll maybe ease off on the gas pedal and tackle a couple of better races in the autumn.

“It’s going to be very interesting to see his next start and see what he’s got out of this. I think he’ll cut the mustard this horse. I think he’ll get there.”

Congratulations to Galaxy Raider’s owners and all involved with the outstanding prospect’s debut win.